THE COST OF MONEY MATTERS 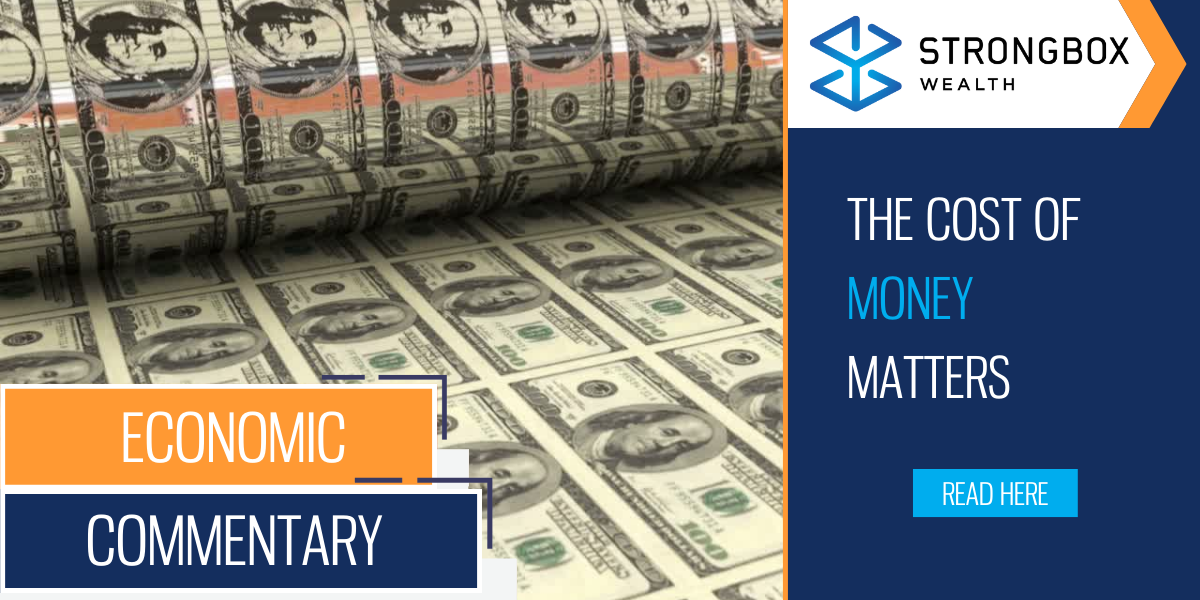 THE COST OF MONEY MATTERS

Against a backdrop of tightening monetary policy, heightened geopolitical tensions, weakening economic data, fatigued business and consumer confidence, atypical currency movements, an overall risk-off atmosphere for stocks through the first three quarters of this year, and U.S. midterm elections on Tuesday, November 8th, investors should prepare for further volatility over the remaining months of this year.

The cost of money equals interest rates. The pace of interest rate increases this year by the Federal Reserve is twice as fast as any since 1988. The goal of the Fed is to balance the act of cooling 50-year high inflation rates while not triggering a severe economic downturn. Most market participants feel the Fed must “thread the needle” to orchestrate a soft landing, thus preventing our domestic economy from falling into a recession.

Relative stability in the capital markets is typically brought about by knowns or very high conviction in expectations. For now, there is worry and wonder about what level the Fed will stop in its rate hike cycle, otherwise known as the terminal rate. The inflation rate appears to have peaked at 9.1% in June but further proof of monthly declines in core inflation measures are needed to reassure markets that the Fed will not aggressively continue rate hikes beyond an expected terminal rate of roughly 5% by end of first quarter 2023.

Corporate earnings drive stock prices long-term and the consensus expectation for increased earnings in 2023 and 2024 remains intact, albeit at a lower level than recently forecast. The significant upside stock market rally thus far in October has the Dow Jones Industrial Average on pace for its best October ever and second best monthly performance in thirty years, in part driven by improved sentiment due to generally positive third-quarter earnings announcements and year-end forecasts. Still, many prominent CEOs are warning of a global recession in 2023.

Geopolitical tensions are always a wildcard to accurately predict. Consensus opinion around Russia’s ongoing response to its lack of significant military operational progress in Ukraine, along with its hostile rhetoric about deploying tactical nuclear weapons, leads most experts to conclude President Putin will escalate his conflict at some point, if not attempt to draw NATO nations into the fold. Last week, Xi Jinping, President of the People’s Republic of China, tightened his unrivaled grip on Communist power by securing an unprecedented third-term election win. Along with already deteriorating relations with the West, many strategists forecast President Xi will now focus his secured power on reclaiming Taiwan by force in its quest for Chinese reunification. The United States and many of its allies support Taiwan’s independence with a promise to defend their country if invaded by the People’s Republic of China. Being drawn into direct conflict or waging war with another world superpower would reset near all forward looking economic expectations and necessitate an essential review of client portfolio risk exposure. Inflation levels would likely spike and greatly accelerate the need for domestic reliance on our essential consumer goods production capacity and U.S. supply chain fulfillment, an otherwise worrisome national security Achilles heel slowly formed over the years by our current globalized production dependence.

MONETARY POLICY AND INTEREST RATES – THE HIGHER COST OF MONEY

At an economic policy symposium held this year from August 25-27, Federal Reserve Chair Jerome Powell delivered his most explicit message to date that the Fed is firmly committed to reducing inflation to what it considers is a much lower and appropriate level of price stability. Chair Powell stressed that bringing about lower inflation will require the Fed to “use our tools forcefully” to attack inflation that is running hot at its highest level in 40-plus years. He added, “while higher interest rates, slower growth, and softer labor market conditions will bring down inflation, they will also bring some pain to households and businesses. These are the unfortunate costs of reducing inflation. But a failure to restore price stability would mean far greater pain.” In later remarks, Fed Chair Powell emphasized “sacrifice” in the context that there would be no easing of monetary tightening (rate hikes) at the first sign of a dip in inflation. This speech was the catalyst for bond market rates to spike higher and reset the collective market’s expectation that the Fed Funds terminal rate could reach 5% during the first half of 2023. The Fed Funds Rate was last raised to 5% in 2006. Accordingly, two 0.75% increases are now priced into the Fed Rate outlook by year end, increasing from 3% to 4.5% (see chart). 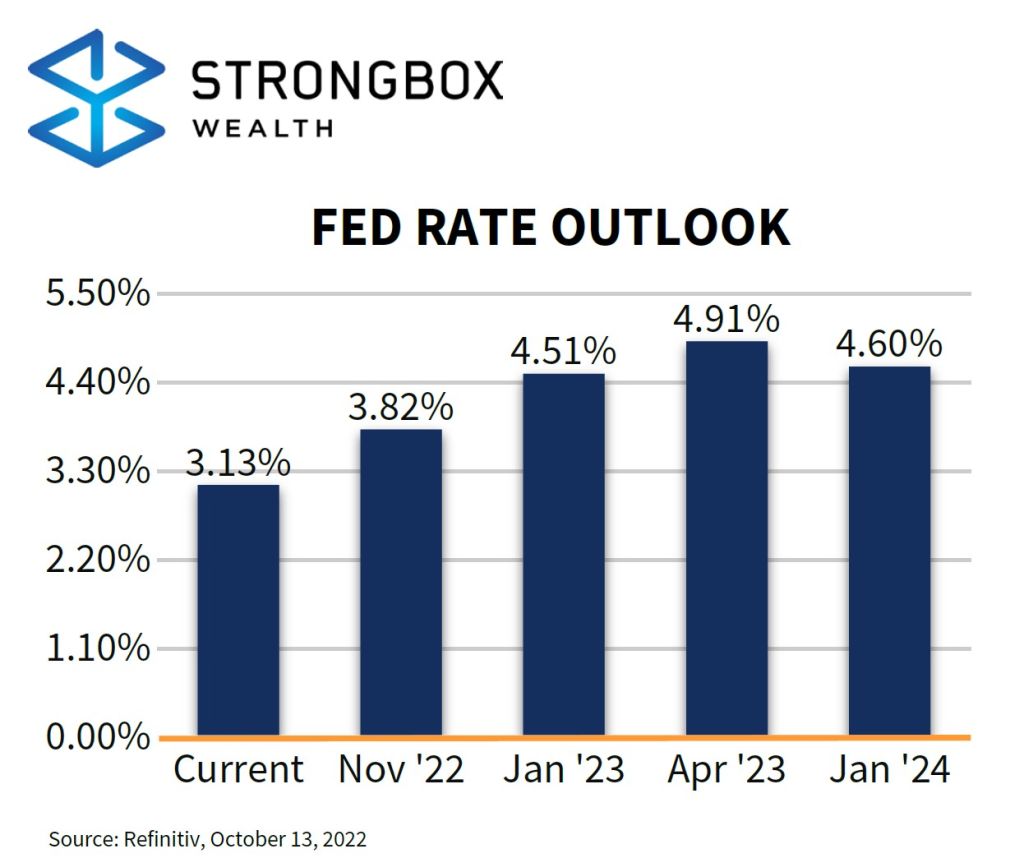 Rate hikes have already significantly impacted the housing market and most economists feel the U.S. will be in a recession by the second half of 2023. Taking Fed Chair Powell at his word, there is more economic pain to come; in certain areas like the labor market, the pain is almost completely in front of us rather than behind.

The bottom line is that the Fed isn’t likely going to stop or slow rate hikes very soon. Expect another hike by 0.75% in early November, followed by another 0.50% – 0.75% in mid-December. Raising rates cool demand and is the Fed’s main tool for trying to wrestle inflation back under control. Note that it hasn’t been since 1980 that the Federal Reserve has increased rates at this very aggressive pace and scale. 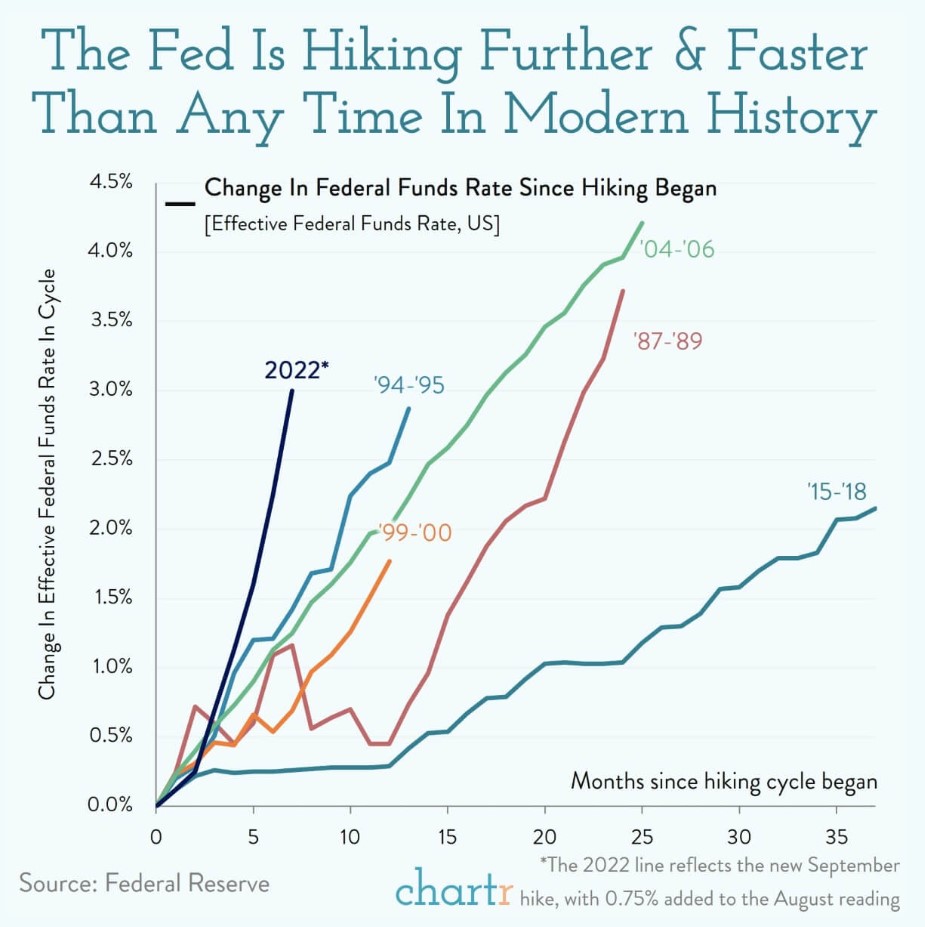 The higher cost of money matters, relative to interest rates, on many fronts to include:

As we illustrated in our April 27, 2022, Market Update, “inflation is the rate of increase in prices over a period of time. Importantly, those increased prices equate to a decline in the purchasing power of your dollar over that same period of time.” Since then, inflation rates peaked in June but remain at the highest levels since the early 1980s. How the current elevated inflation rates abate over the next several months will in large part determine the Fed’s course of action to combat rising prices. Lower inflation rates should equate to a less hawkish Fed and provide relief to current stressors in the stock and bond markets. Conversely, a resumption of higher rates of inflation from here would likely lead to higher interest rate expectations and amplified volatility in asset prices.

Our view is that peak inflation is likely behind us, cresting in June at 9.1% (see chart), but persistently elevated inflation rates will remain longer than most expect. Inflation remains relentless and has been historically difficult to wrestle down. The overall index climbed 8.2% in September versus the prior year. By some metrics, inflation is hitting new highs. Stripping out food and fuel to get a sense of underlying price trends, the so-called core index climbed by 6.6%, the fastest pace since 1982 and more than economists had expected. 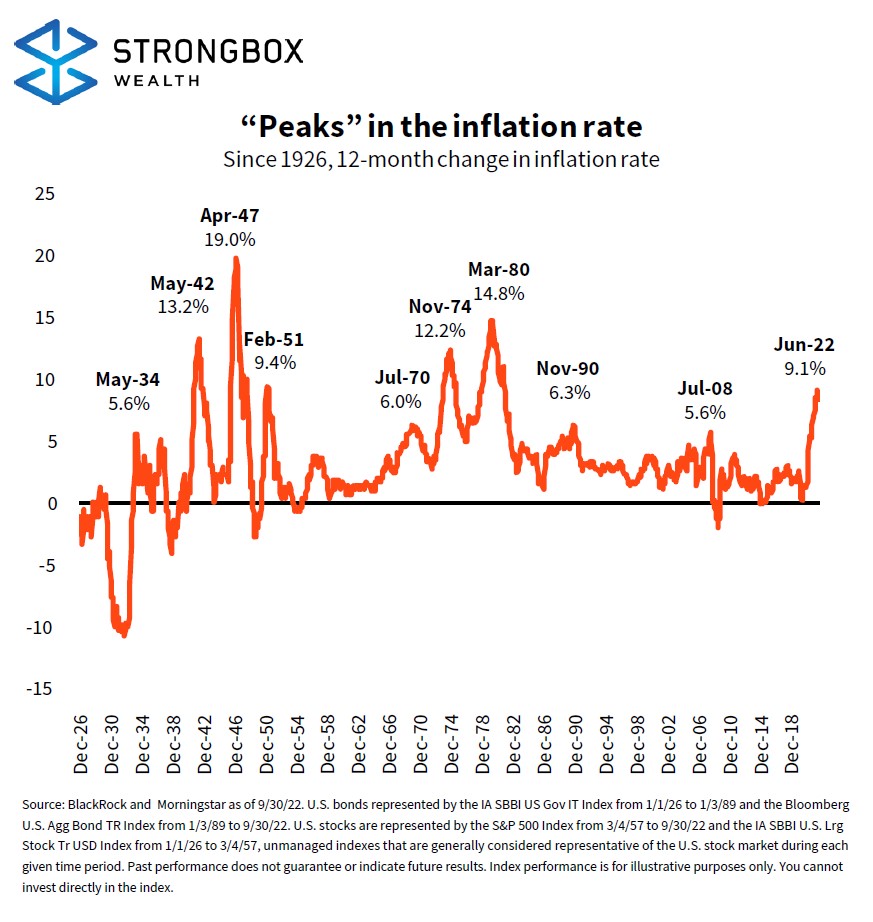 Rents are still climbing sharply. The cost of renting a primary residence climbed a brisk 7.2% in the year through September. That measure typically climbs around 3% per year. Housing costs matter because they move slowly while making up a big chunk of overall inflation. Other services are becoming much more costly. Whether it is pet care or a trip to the dentist, prices for a wide range of services are ratcheting up. This is a worrisome trend because it suggests labor wage increases, typically the largest cost for service providers, are feeding into higher prices.

A long-awaited slowdown in goods prices isn’t happening as quickly as hoped in big ticket items and cars are a case in point. Used car prices dropped in September but not nearly as much as economists expected. Meanwhile, new car prices and car parts continue to increase sharply in price. A prominent economist, Ian Shepherdson, shared “the downward pressure on inflation is visible everywhere except in the inflation numbers.”

As inflation interrelates with investment assets, the next chart illustrates that historical price level returns in stocks and bonds have shown remarkable resilience following peak levels of inflation. History will soon tell if this tendency repeats itself in this inflation cycle. 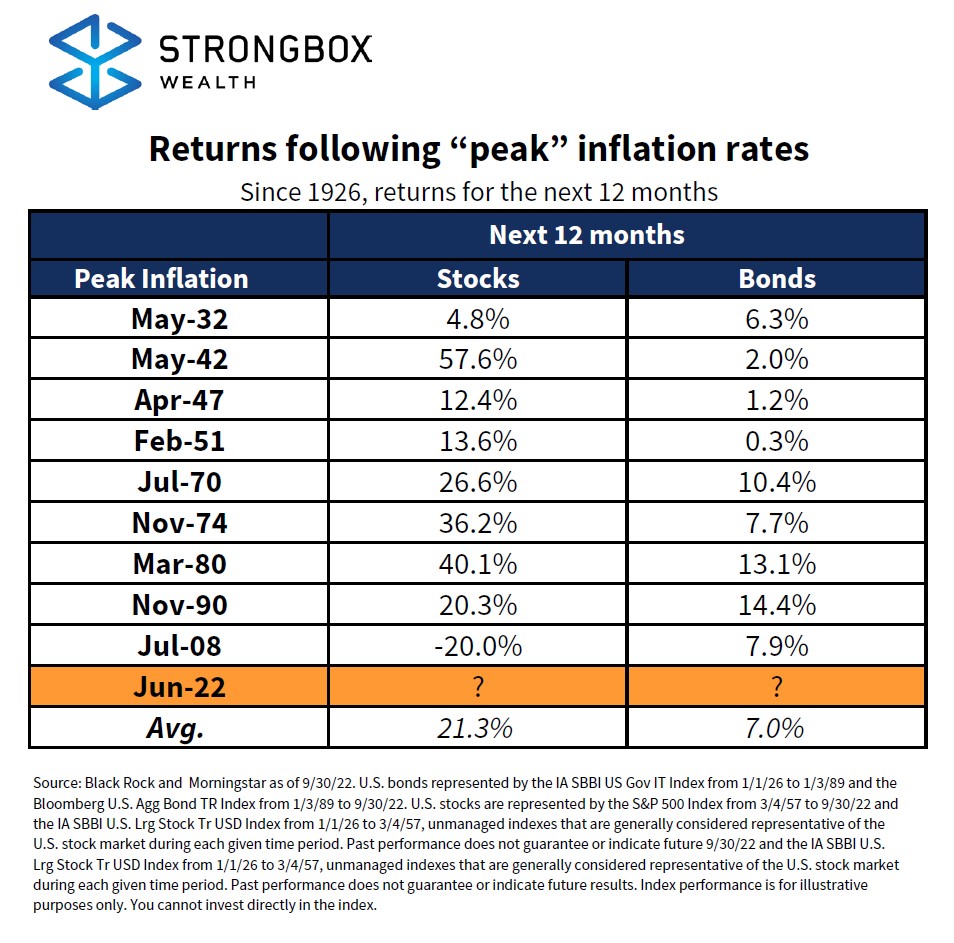 Of significance to many of our readers, Social Security benefits will get the largest bump in 40+ years, as recipients will collect a cost-of-living adjustment increase of… TO CONTINUE READING WHICH INCLUDES OUR VIEW ON STOCKS, BONDS, AND KEY TAKEAWAYS, DOWNLOAD FULL ARTICLE BELOW.

The views reflected in the commentary are subject to change at any time without notice. Nothing on this e-mail constitutes investment advice, performance data or any recommendation that any particular security, portfolio of securities, transaction or investment strategy is suitable for any specific person. Any mention of a particular security is not a recommendation to buy or sell that security. Strongbox Wealth manages its clients’ accounts using a variety of investment techniques and strategies, which are not necessarily discussed in the commentary. Investments in securities involve the risk of loss. Past performance is no guarantee of future results.This correspondence is solely for informational purposes. Advisory services are only offered to clients or prospective clients where StrongBox Wealth, LLC and its representatives are properly licensed or exempt from licensure. Past performance is no guarantee of future returns. Investing involves risk and possible loss of principal capital. No advice may be rendered by StrongBox Wealth, LLC unless a client service agreement is in place.
StrongBox Wealth LLC is registered as an investment adviser with the Securities and Exchange Commission (SEC). StrongBox Wealth LLC only transacts business in states where it is properly registered, or is excluded or exempted from registration requirements. SEC registration does not constitute an endorsement of the firm by the Commission nor does it indicate that the adviser has attained a particular level of skill or ability.
LEARN MORE
LEARN MORE
LEARN MORE
Previous
Next